Science never ceases to amaze me hen it comes to new findings and strange animals, reptiles, amphibians, etc. It’s icky, gross and often VERY threatening. This is fine when it is extinct. 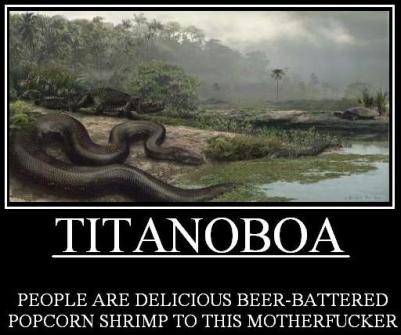 I recently had the chance to view documentary on ‘Titanoboa’. I figured it might be a fun romp into Docu land with a few added giggles. Instead it has turned me into a creature obsessed.

This colossal snake is closely related to the Amazonian Boa. This is frightening because it exists today. However Titanonoa died 60-63 Million years ago. The reason I preceded with the picture above is that Titanoboa was a MONSTER that could devour a large human without blinking.

For Americans, that is 50 feet long, 2+ tons, its width larger/higher than your bed or kitchen table. And able to eat small mammals in a single bound with jaws that open to the size of a doorway in your house.

Still not sure how big it would be, check out these photos from The Smithsonian Exhibit

Mother’s hide your children! No, just kidding. However there is a lot to be learned from this behemoth. I just scientists don’t get a bug up their buttt and decide to clone this bad boy.

You can watch the documentary on Titanoboa here;

This limbless amphibian is the newest find in the Amazon. The Amazon is full of new undiscovered species and plants. This happens to be one of them.

According to the Inqisitor.com, they found this beast in Brazil.

Monga Bay reports that the strange creature was discovered while the Madeira River was being drained as part of a damn building project in Brazil’s Madeira River. Biologist Julian Tupan said that six penis snakes were found at the bottom of the river.

The amphibious creature is know as  Atretochoana eiseltiis. The scientists ho have found it and studied it tried calling it a ‘Floppy Snake’. Unfortunately due to its, um, happy face, shape color and size, it was re-dubbed ‘Penis Snake’.

I personally am fan of going PG-13 with this little guy, and calling it a trouser snake to soften the blow.

What do you think it should be called?