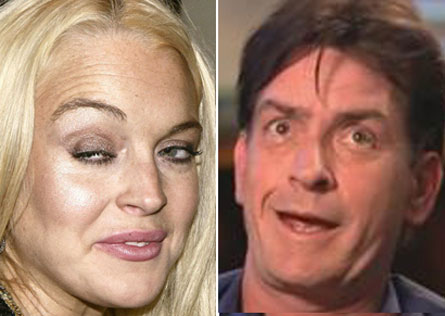 (Photo straight stolen from Michael K and crew at Dlisted.com because it is too good not to share http://dlisted.com/)

According the lovely people at E! Charlie Sheen is back for another romp in the scary movie series. This should be interesting with his ‘Tiger Blood’ on set, i.e. crackhead craziness.

Wait there is more, Lovely Lindsay Lohan aka LiLo has signed on too. Oh…Em…Gee….Fuckballs. This is beyond interesting. I expect this to be ….HIGH-larious. Imagine the Wizard and Queen of drug addiction together. What kind of insurance do you need for that kind of movie? Holy bejesus!

As far as Lohan she once again, or should I say notoriously, has NOT signed a contract yet. So um, is she in it?

Her rep said that, “as of right this moment,” she had not inked a deal, but all insiders are in agreement that she is definitely doing the movie.

Sources also say that the ever-comebacking Charlie Sheen, despite being uncomfortably killed off in Scary Movie 4, will be back for the next sequel, which is being touted as a complete reboot of the franchise and is due in theaters Jan. 11, 2013.

Oh eff me, really. This is like all the other movies Lindsay says she is in. They want her but she is even HIGH-er risk than Sheen who at least has a REAL career backing him up. Maybe he can use his magic Wizard powers to push this through because it will be a must-see movie.

Lets hope neither one OD’s or dies half way through shooting I kind of want to see this made.