This real question for the ladies. What do you get your boyfriend? A tie (see NO)? A geek toy (they already own it and haven’t told you)? Golfing lessons with Tiger Woods? Ok, he might like that one. Real dedication and love are none of these things ladies. What he really want’s is a date night involving a totally ludicrous, sexual, violent guy flick. And I have just the thing. 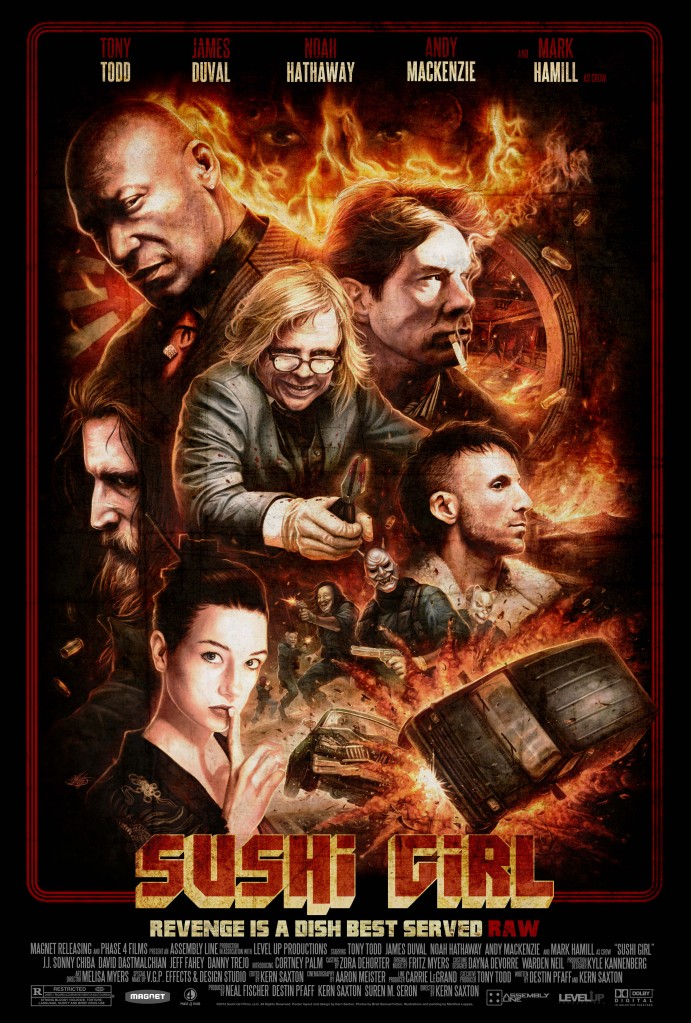 Sushi Girl is everything he ever wanted.

Gratuitous violence. Yeah there is plenty of that thanks to Tony Todd, Andy Mackenzie, Sonny Chiba and the most AWESOME Danny Trejo. Sex? A hot Courtney Palm leads as the ‘Sushi Girl’ laid out as myotaimori (a sushi table/girl). Witty Banter? Add Mark Hamill as the toady, simpering and wicked smart Crow. A secret knight in shining armor with a penchant for nose candy, James Duval. And our hero? Fish played by the ever awesome Noah Hathaway.

What happens when you put together a crew of seasoned professionals like Tony Todd who has a masterful career spanning 20+ years, Andy Mackenzie who has been in over 70 film and TV features ( from The Mentalist, CSI, True Blood), Mark Hamill who will forever be known for his awesome portrayal as young Skywalker, James Duval who will forever be Frank the Rabbit from Donnie Darko in my mind and Noah Hathaway who known his portrayal as Atreyu in the Never Ending story?

How do I know ‘HE’ will like it? I was lucky enough to catch a screening at the Directors Guild. It made me squeamish, happy, sad and scream bad ass at the end. It’s been called Tarinto-esque and it really is. I’ll describe this feature as a ‘happy slice of hell’.

But why trust me? Check out the trailer here;

So ladies what do we do here in LA for the man we love? Take him to a rocking, socking, blow ’em up, hit you where it counts feature. The great part? It’s at Mann’s Chinese Theater and you can buy tickets online. And guys…if she doesn’t buy it…go now before it’s too late.

What are you waiting for? It’s a limited engagement playing from the 2/8-2/14.
Go buy here.