Oh Chik-Fil-A. I really don’t know HOW to file this. Busted, broke and bad form are a good start though. Maybe dirty, horrible and bigot are new categories I should go with.

Recently when Henson co. pulled their toys from Chik-Fil-A, they put this on their Facebook page after the President of Chik-Fil-A came out very vocally AGAINST gay marriage;

I love The Muppet’s, but now I am PROUD of them too.

The fact is recently the most honorable Henson studios pulled their toys from Chik-Fil-A’s kiddy meals because frankly, the CEO of Henson studios is a HUGE advocate of same-sex marriage.

However, when PR scandals like this show up and a company looks like their profits will be taking a dump and losing millions, the weasels show up to cover the companies ass. I ONLY call them weasels because they decided to attack social media on Facebook.

According to Gizmodo they are trying to run a sympathy campaign by LYING and saying the toys have ALREADY been pulled weeks ago. With fake accounts.

Gizmodo had this to say;

Chick-fil-A claimed the toys were pulled because of a “possible safety issue”. That, of course, is a complete lie. A lie that the company may be propagating with fake Facebook accounts of Chick-fil-a sympathists.

And this just fell from bad form to scraping bottom of the barrel. Such tactics are not to be tolerated. Especially when there is proof.

Check this out. Some astute Facebooker caught them at it. 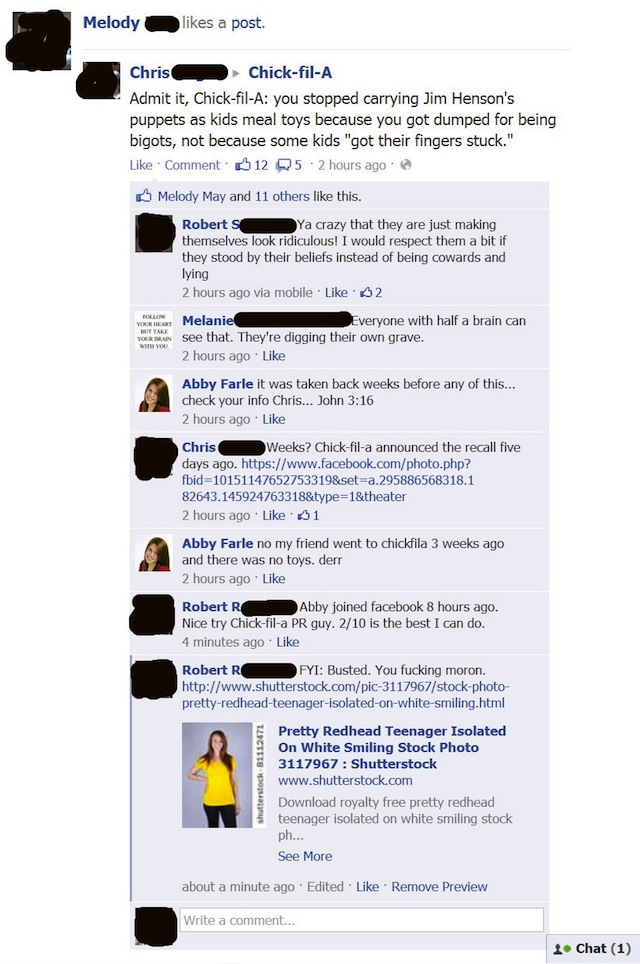 I want to hug him.

Where will Chik-Fil-A go from here? Apparently they will be losing even more funds. They have been banned by the entire city of Boston, Massachusetts is telling them to go to hell as well.

As far as I am concerned they might as well close up their restaurant in Hollywood, CA too. They won’t be profiteering on the gay population in West Hollywood and parties are pretty liberal here.

Time to take a hike Chik-Fil-A, your day in the sun just fell into the gutter.

I think they need to stop before it gets worse.

What do you think?

2 thoughts on “CAUGHT! Chik-Fil-A Playing a Girl on Facebook to Save Face. Creates #Faceplant”